Largely a culmination of research and tid-bits Chuck Missler gathered over many years, Chuck claims this book is one of the most complete and comprehensive reference edition on the hidden bible codes published to date. Available from Amazon or the Kononia House store. 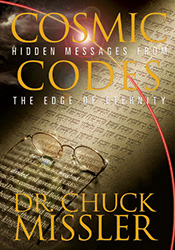 Study the implications of our finite universe and the shocking discoveries of quantum physics at the very boundaries of reality. Learn their significance to our origin and personal destinies! Your excitement will grow as Chuck Missler details astonishing hidden messages within the text of the Torah that could only have been placed there by the Great Author himself.

A former Navy engineer and silicon valley CEO, pastor and Bible teacher Chuck Missler explores the impact of information sciences on our understanding of ancient texts…including microcodes, macrocodes and metacodes…as well as the highly controversial “equidistant letter sequences” discovered in the Bible.

You will be able to use this exciting information to discover the hidden messages yourself, because many of them do not require a computer to decipher.

The interception and breaking of secret codes have tumbled proud thrones and determined the outcome of major wars since the dawn of history. The decipherment of hidden messages has turned the tide of history on more occasions than one can enumerate. And even today they continue to have more of an impact than any of us can possibly imagine.

Dedicated scientists continue to scan the heavens in their search for signals from distant galaxies. Committed teams of microbiologists and computer specialists continue their efforts to further decipher the genetic codes in our DNA. And now we discover that all this time there apparently have been hidden codes in the most widely distributed document on the Planet Earth: the Bible.

Do these hidden codes hold the key to our personal odyssey in this interval between the miracle of our origin and the mystery of our destiny?

We also live in a time in which academic scholarship has seriously attacked the integrity of the Biblical text. No generation in history has been more skeptical of the notion that the Bible is anything more than a very constructive but specious collection of folklore and traditions. It is extremely provocative that the impact of modern technologies appear to have revealed discoveries that are desperately needed for our cynical and skeptical times.

This book will attempt to explore some of the recent discoveries that seem destined to impact each of us in ways that will eclipse all of our other priorities. We will, of course, begin by laying a foundation upon which we will attempt to build a balanced perspective.

There are actually many types of hidden codes in the Bible, and the recently controversial equidistant letter sequences are but one of them. There are those who are irrepressibly enthusiastic about the equidistant letter sequences in the Bible. There are others who dismiss these incidences as simply statistical oddities that will occur in any extensive corpus of text. And there are some who even regard the pursuit of these codes as having a sinister portent.

However, very few of the popular treatments of this intriguing subject evidence any background in cryptology, with is precisely the science at issue. Having spent a 30 year career in both military and civilian pursuits in advanced communication and information science technologies — including deeply classified ventures in the intelligence field — and, also, having more than three decades in serious Biblical studies, I felt that a broader approach to the subject of hidden messages was appropriate.

Are there really hidden messages in the Bible? If so, why?

We will, of course, also explore the controversial equidistant letter sequences, their potential significance, and their latent dangers. And yet the most astonishing codes are of the kind for which you do not need a computer.

We will explore some remarkable discoveries about the alphabets used in the Biblical texts and the microcodes which reveal some surprising aspects hidden behind the text itself.

But beyond the “jots and tittles” of the microcodes, we will also explore some far more profoundly significant macrocodes — codes that reveal the strategic structure of the composite messages, codes that transcend the time domain of the message segment itself — and which have irrefutable implications regarding the source of these messages and their significance.

We will begin our review by exploring some background in the art of cryptology — the study of secret writing — and some of the efforts which have been devoted to the pursuit of extraterrestrial communication: the attempts to discern signals from outside of our space-time.

What characteristics would an extraterrestrial communication require? How would we recognize an extraterrestrial message if we encountered one? How could we authenticate it — to distinguish it from a fraud, a contrivance, or an accident of chance circumstances?

We will also take a peek beyond our own horizon and explore the metacodes: those broader insights from the information sciences, and the remarkable advances in microbiology which have permitted the deciphering of the “codes of life” within our own DNA. We will also explore some of the deeply disturbing insights of quantum physics which are confronting our very concepts of reality.

We will be on a path pursuing the most dramatic discoveries of our time — and while we will deal with some of the most challenging insights ever to confront mankind, the necessary technical background is within the grasp of any diligent reader. It will be an entrance to the most engaging adventure conceivable, and you will be challenged to participate personally.

It will, however, be of paramount importance to first “blindfold your prejudices” and presuppositions. This could well prove to be the most personally impacting book you have ever read. It might even alter your own personal destiny.

It will be helpful to carefully review the Table of Contents, noting the major sections of the book, to maintain an awareness of the overall structure as we begin our adventure.

Fasten your seatbelts. It should prove to be great fun!

Chuck Missler’s Cosmic Codes is one of the most important books of our time. Rarely have I read a book that presented Biblical hermeneutics (an understanding of the theology of the Bible) in such a clear and persuasive way. This book will turn unbelievers into believers and turn those who are lukewarm into more serious students of the Bible. Once you start reading it, you cannot put it down. It is the antidote to much of the frivolous, superficial books that have come out recently on the Bible. My advice is to get it, read it, and pass it on.

Cosmic Codes was the authoritative resource that we relied on in the research of our PAX-TV/ Discovery Channel television special Secrets of the Bible Code Revealed. It’s absolutely packed with fascinating factual information on all of the Bible-related codes.

Chuck Missler writes from a technological and Biblical background in this cutting-edge analysis of the hidden codes in the Bible. This thoroughly researched book assists those investigating the inerrancy of the Word of God.

Chuck Missler has searched the entire range of the Bible and documented the presence of messages held beyond a simple reading of the text. For many, the information in Cosmic Codes: Hidden Messages from the Edge of Eternity will open very new meanings to this very old book.