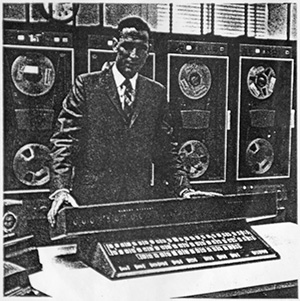 Excerpt from a University of California Quarterly Publication

REPORT FROM OUR ALUMNI

To make the reunions of the Engineering Executive Program at Lake Arrowhead, Charles W. Missler flies in in his own Piper Commanche - which pretty well characterizes the EEP alumnus.

At 32, Mr. Missler is one of the youngest managers at Ford Motor as head of the Technical Computer Services Department of the Company's Engineering Staff, an Annapolis graduate, ex-Air Force pilot, and Detroit's "Outstanding Young Engineer of 1964".

Along the way, Mr. Missler enrolled in the Engineering Executive Program, placing fourth in the Class of '63 and earning a Master of Engineering degree. "My regular job at the time was as senior scientist with the System Development Corp.," he recalls. "Because my work kept me flying back and forth between Los Angeles and Washington, I frequently had a tough time making my UCLA classes."

Mr Missler joined Ford in 1963 and now directs the operations of digital and analog computers and peripheral equipment in the Company's technical center. Since taking over, he has expanded the center's capabilities from the existing Philco 212 Electronic Data Processing
System to include a multiple access/time sharing system. The planned addition of a second Philco 212 system will make the EEP alumnus manager of the nation's second largest computer facility — next to the government's NORAD facility — according to a Ford spokesman.

Mrs. Misser was formerly a liberal art student on the Westwood campus, and the two UCLA alumni are the parents of two children, Charles, Jr. 6, and Mark, 4.

Among hobbies, Mr. Missler lists the painting of landscapes, sailing, skiing, camping... and flying his own plane to get there.